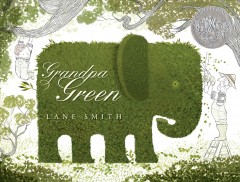 Lane Smith has written and illustrated a bunch of stuff, including picture books There Is A Tribe Of Kids; John, Paul, George & Ben; Madam President; and middle-grade novel Return to Augie Hobble . He is the author and illustrator of 2012 Caldecott Honor book Grandpa Green, and the New York Times bestseller It's a Book, which has been translated into more than 20 languages. Lane's titles with Jon Scieszka have included the Caldecott Honor-winner The Stinky Cheese Man; The True Story of the 3 Little Pigs; Math Curse; and Science Verse. Lane's other high profile titles include Hooray for Diffendoofer Day! by Dr. Seuss and Jack Prelutsky;The Very Persistent Gappers of Frip by George Saunders; Big Plans by Bob Shea; and James and the Giant Peach by Roald Dahl. In 1996 Lane served as Conceptual Designer on the Disney film version of James and the Giant Peach. Lane also wrote and illustrated the retro, cult favorites, The Happy Hocky Family and The Happy Hocky Family Moves to the Country. Like the Hocky family, he and book designer Molly Leach live in a little town in the country.