Desmond and the very mean word : a story of forgiveness 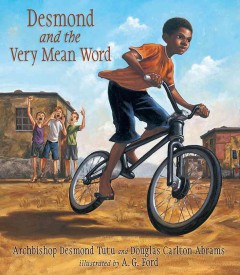 Archbishop Desmond Tutu was awarded the Nobel Peace Prize in 1984 for his lifelong struggle to bring equality, justice, and peace to his native South Africa. He continues to playan important role as a spokesperson worldwide. The co-author of God&;s Dream, Archbishop Tutu lives in South Africa.

Douglas Carlton Abrams is the co-author with Archbishop Tutu of God&;s Dream. His many books have been translated into more than two dozen languages. He lives in California.

A. G. Ford is the illustrator of the New York Times bestseller Barack by Jonah Winter and Michelle by Deborah Hopkinson. He also illustrated Goal! by Mina Javaherbin. He lives in Dallas, Texas.