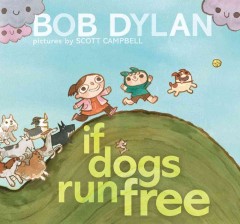 Bob Dylan has released thirty-eight studio albums, which collectively have sold over 120 million copies around the world. He won the Nobel Prize in Literature and has been awarded the French Legion of Honor, a Pulitzer Prize Special Citation, and the Presidential Medal of Freedom, the country&;s highest civilian honor. His memoir,&#160;Chronicles: Volume One, spent a year on the&#160;New York Times&#160;bestseller list.

Scott Campbell&;s paintings have appeared in numerous shows and publications around the world. He has created award-winning comics, such as &;Igloo Head and Tree Head,&; which appeared in the Flight anthology, and is the illustrator of&#160;Zombie in Love&#160;and&#160;Zombie in Love 2 + 1&#160;by Kelly DiPucchio;&#160;East Dragon, West Dragon&#160;by Robyn Eversole; and&#160;If Dogs Run Free&#160;by Bob Dylan. He is the author and illustrator of Hug Machine.&#160;Scott lives in New York City. Visit him at PyramidCar.com.