Can't we talk about something more pleasant? 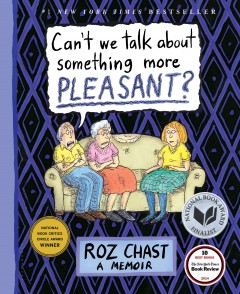 Roz Chast grew up in Brooklyn. Her cartoons began appearing in the New Yorker in 1978. Since then, she has published more than one thousand cartoons in the magazine. She has written and illustrated many books, including the national bestseller Going into Town, What I Hate: From A to Z, and the collections of her own cartoons The Party After You Left and Theories of Everything. She is the editor of The Best American Comics 2016 and the illustrator of Calvin Trillin's No Fair! No Fair! and Daniel Menaker's The African Svelte, all published in Fall 2016. She was awarded the Harvey Award Hall of Fame Award.