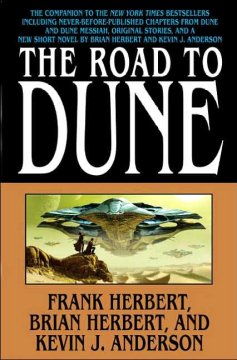 Reviews Author Notes
Frank Herbert is widely considered to be the greatest of all science fiction writers. He was born in Tacoma, Washington, and educated at the University of Washington, Seattle. In 1952, Herbert began publishing science fiction, but he was not considered a writer of major stature until the 1965 publication of Dune. Dune Messiah, Children of Dune, God Emperor of Dune, Heretics of Dune, and Chapterhouse: Dune followed, completing the saga that the Chicago Tribune would call "one of the monuments of modern science fiction." Herbert is also the author of some twenty other books, including The Eyes of Heisenberg, The Dosadi Experiment, and The Green Brain. Frank Herbert passed away in 1986.

Brian Herbert, the son of Frank Herbert, is a multiple New York Times bestseller in his own right. He is the winner of several literary honors and has been nominated for both the Hugo and the Nebula Awards. His science fiction novels include Sidney's Comet; Sudanna, Sudanna; The Race for God; and Man of Two Worlds (written with Frank Herbert). In 2003, he published Dreamer of Dune, a Hugo Award-nominated biography of his father.

Kevin J. Anderson has written dozens of national bestsellers and has been nominated for the Nebula Award, the Bram Stoker Award, and the SFX Reader's Choice Award. His many original novels, including Captain Nemo, Hopscotch, and Hidden Empire, have received praise from critics everywhere. He has set the Guinness-certified world record for the largest single-author book signing.
Brian Herbert, the author of numerous novels and short stories, has been critically acclaimed by leading reviewers in the United States and around the world. The eldest son of science fiction superstar Frank Herbert, he, with Kevin J. Anderson, is the author of Hellhole and continues his fatherâs beloved Dune series with books including The Winds of Dune, House Atreides, Sandworms of Dune, among other bestsellers. He also wrote a biography of his father, Dreamer of Dune. Herbert graduated from high school at age 16, and then attended U.C. Berkeley, where he earned a B.A. in Sociology. Besides an author, Herbert has been an editor, business manager, board game inventor, creative consultant for television and collectible card games, insurance agent, award-winning encyclopedia salesman, waiter, busboy, maid and a printer. He and his wife once owned a double-decker London bus, which they converted into an unusual gift shop. Herbert and his wife, Jan, have three daughters. They live in Washington state.