Sitting Bull : Lakota warrior and defender of his people 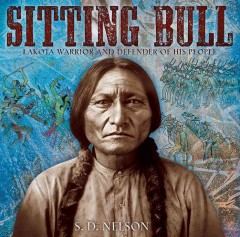 Reviews Author Notes
S. D. Nelson is a member of the Standing Rock Sioux tribe in the Dakotas. He is the award-winning author and illustrator of Black Elk&;s Vision&;recipient of a Western Writers of America Spur Storyteller Award and named a Chicago Public Library Best of the Best. He lives in Flagstaff, Arizona. Visit him online at sdnelson.net.