Wild justice : the people of Geronimo vs. the United States 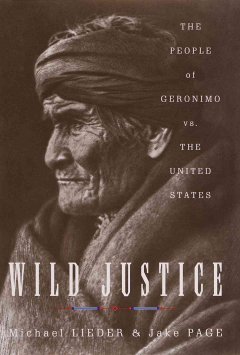 Michael Lieder has been a lawyer since graduating from Georgetown University Law Center in 1984. Now working in Washington, D.C., he has taught at the University of Toledo College of Law and published several articles in legal journals, including Analyses of American Indian Law.

Jake Page, a former editor of Smithsonian magazine, is a science writer and novelist whose fictional work includes The Stolen Gods, a Southwestern mystery concerning the theft of Indian religious artifacts. Called by The Denver Post "one of the Southwest's most distinguished authors," he has written numerous magazine articles on Indian affairs. With his wife, photographer Susanne Page, he wrote Hopi and Navajo, and is producing a forthcoming volume on American Indian mythology.