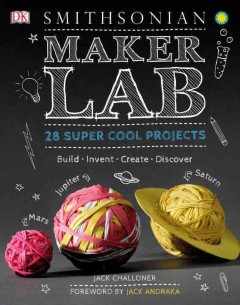 Jack Challoner is a former science and math teacher and educator at the London Science Museum, and author of over 40 science and technology books, including The Cell: A Visual Tour of the Building Block of Life and DK Eyewitness Books: Energy. He is based in Bristol, England.

Jack Andraka was just a fifteen year old Maryland high school sophomore when he invented an inexpensive early detection test for pancreatic, ovarian, and lung cancers. Now, at seventeen, Jack's groundbreaking results have earned him international recognition, most notably a 2014 Jefferson Award, the nation's most prestigious public service award, 1st place winner in the 2014 Siemens We Can Change the World Challenge, the 2012 Intel ISEF Gordon Moore Award, the 2012 Smithsonian American Ingenuity Youth Award, a spot on Advocate Magazine's 2014 40 under 40 list, a fellowship as a National Geographic Explorer, and he's also the 2014 State of Maryland winner of the Stockholm Water Prize. He is currently a student at Stanford University in Palo Alto, California.