The shape of the world : a portrait of Frank Lloyd Wright 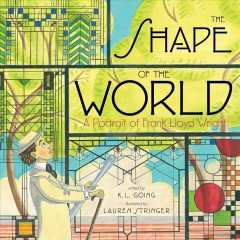 K.L. Going is the author of many critically acclaimed novels, including King of the Screwups, The Garden of Eve, Saint Iggy, The Liberation of Gabriel King, and Fat Kid Rules the World. She lives with her family in Glen Spey, New York. Visit her at KLGoing.com.

Lauren Stringer has illustrated many celebrated picture books, including&#160;Deer Dancer&#160;by Mary Lyn Ray;&#160;The Princess and Her Panther&#160;by Wendy Orr;&#160;Scarecrow&#160;and&#160;Snow, both written by Cynthia Rylant; as well as her own&#160;Winter Is the Warmest Season&#160;and&#160;When Stravinsky Met Nijinsky. She lives with her family in Minneapolis, Minnesota. Visit her at LaurenStringer.com.