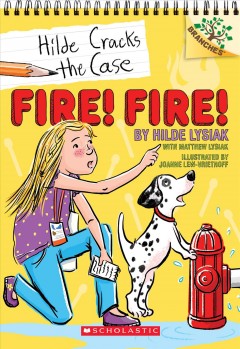 Author Notes
Hilde Lysiak is the 11-year-old publisher of Selinsgrove, Pennsylvania's newspaper, the Orange Street News. The paper has 700+ paid subscribers and is read by thousands more online. Hilde's journalism efforts have been profiled by the New York Times, Columbia Journalism Review, NBC Today, and hundreds of other newspapers and television stations around the world. Hilde is cowriting the Scholastic Branches series Hilde Cracks the Case with her dad, Matthew Lysiak.

Matthew Lysiak is a nationally recognized journalist and author. He has reported for the New York Daily News, Newsweek, the New York Sun, AM New York, and the Guardian. He has also appeared as a contributor on The Today Show, MSNBC, and countless other media outlets to discuss his work. He coauthored the young adult memoir of teen scientist Jack Andraka, Breakthrough: How One Teen Innovator Is Changing the World, and was the author of Newtown: An American Tragedy. Matthew is cowriting the Branches early chapter book series Hilde Cracks the Case with his daughter, Hilde Kate Lysiak.

Joanne Lew-Vriethoff is the acclaimed illustrator of many picture books, including Beautiful by Stacy McAnulty, named among School Library Journal's 2016 Books with a Message. She is a Mom's Choice Gold Award medal winner whose illustrations can be found in The Dancing Pancake by Eileen Spinelli and Peace, Baby! by Linda Ashman. Joanne also is the illustrator of the Hilde Cracks the Case series by Hilde Lysiak. She lives in Amsterdam with her husband and two children.