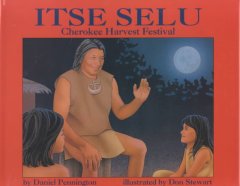 Daniel Pennington is a descendant of the Cherokee tribe. Growing up in rural Tennessee, Daniel learned little of his roots. He began his writing career after he tried to find books for his young daughter on Native American culture and what it means to be a Cherokee. His search for an accurate and unbiased portrayal of cultural traditions was disappointing, so he decided to research and write his own book.

Daniel researched his first book, ITSE SELU: CHEROKEE HARVEST FESTIVAL, extensively. Before the book was published, he sent it to 30 different sources, including an archivist from the Museum of the Cherokee, the deputy principal Chief of the Cherokee Nation, and the Smithsonian Institution National Museum of the American Indian to affirm its accuracy and authenticity. Daniel and his family currently live in Massachusetts.