Noni the Pony rescues a joey 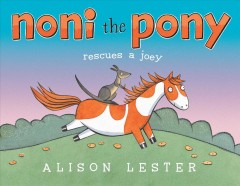 Alison Lester has written and illustrated numerous children’s books. She has won many awards in her native Australia, including the Children’s Book Council of Australia Picture Book Award. Over her twenty-one-year career she has produced such Australian classics as the Clive Eats Alligators series, Magic Beach, Imagine, and My Farm, and recently she has also started writing novels, including The Quicksand Pony and the Bonnie and Sam series. In 2011, she was named the Australian Children’s Laureate.