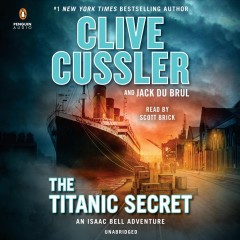 Clive Cussler is the author or coauthor of more than 50 previous books in five best-selling series, including Dirk Pitt, NUMA Files, Oregon Files, Isaac Bell, and Sam and Remi Fargo. His nonfiction works include Built for Adventure: The Classic Automobiles of Clive Cussler and Dirk Pitt, plus The Sea Hunters and The Sea Hunters II. They describe the true adventures of the real NUMA, which, led by Cussler, searches for lost ships of historic significance. With his crew of volunteers, Cussler has discovered more than 60 ships, including the long lost Confederate ship Hunley. He lives in Arizona.

Scott Brick has recorded bestsellers and Pulitzer Prize winners in every conceivable category, over 800 titles since his debut in 1999. A Grammy nominee, Scott has won over fifty Earphones Awards, five Audie Awards, and has twice been named Publishers Weekly’s Narrator of the Year. After AudioFile Magazine proclaimed him a Golden Voice, his work was thereafter profiled in The Wall Street Journal, The New York Times, The Los Angeles Times, and Entertainment Weekly. In 2015, Scott began teaching the nation’s first fully-accredited university course devoted solely to audiobook narration at UCLA.