Who got game? : baseball : amazing but true stories 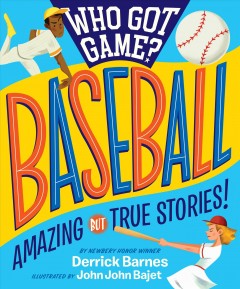 Derrick D. Barnes is from Kansas City, MO. He is the winner of the 2018 Ezra Jack Keats Book Award for outstanding new writer, and his picture book Crown: An Ode to the Fresh Cut&#160;took home four honors at the 2018 American Library Association&;s Youth Media Awards: the Coretta Scott King Author Honor and Illustrator Honor, the Newbery Honor, and the Caldecott Honor. Derrick is also the author of the New York Times bestselling picture book The King of Kindergarten, the bestselling chapter book series Ruby and the Booker Boys, the middle grade novel We Could Be Brothers, and the YA novel The Making of Dr. Truelove, which was recognized by the ALA as a Quick Pick for Reluctant Readers. Derrick created the popular blog Raising the Mighty, where he chronicles the experience of bringing up four beautiful black boys in America. He lives in Charlotte, NC, with his wife, Dr. Tinka Barnes, and their four sons, all of whom play sports.

John John Bajet is a designer at Renegade Animation, and works on the Cartoon Network Show Tom &#38; Jerry. He is the illustrator of If We Could Do What Animals Do.