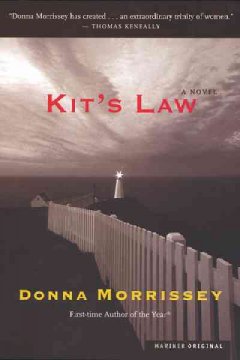 Reviews Author Notes
Donna Morrissey was born in The Beaches, a small village on the northwest coast of Newfoundland that had neither roads nor electricity until the 1960s a place not unlike Haireâs Hollow, which she depicts in Kitâs Law. When she was sixteen, Morrissey left The Beaches and struck out across Canada, working odd jobs from bartending to cooking in oil rig camps to processing fish in fish plants. She went on to earn a degree in social work at Memorial University in St. Johns. It was not until she was in her late thirties that Morrissey began writing short stories, at the urging of a friend, a Jungian analyst, who insisted she was a writer. Eventually she adapted her first two stories into screenplays, which both went on to win the Atlantic Film Festival Award; one aired recently on CBC. Kitâs Law is Morrisseyâs first novel, the winner of the Canadian Booksellers Association First-Time Author of the Year Award and shortlisted for many prizes, including the Atlantic Fiction Award and the Chapters/Books in Canada First Novel Award. Morrissey lives in Halifax, Nova Scotia.