Star wars, the clone wars : stories of light and dark 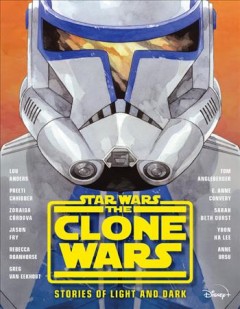 Lou Anders is the author of the Thrones & Bones trilogy of fantasy adventure novels and Star Wars: Pirate's Price. Tom Angleberger is the author of the Origami Yoda series, Beware the Power of the Dark Side! and The Mighty Chewbacca in the Forest of Fear! Preeti Chhibber wrote Peter & Ned's Ultimate Travel Journal for Marvel Press. Star Wars: A Jedi You Will Be, releases in October. E. Anne Convery is a Californian and has lived up and down the state. Star Wars changed her life. Zoraida Córdova is the author of nine novels, including the Brooklyn Brujas series, Incendiary, Star Wars: A Crash of Fate, and The Way to Rio Luna. Sarah Beth Durst is the author of over twenty books including The Girl Who Could Not Dream, Drink Slay Love, and The Queens of Renthia series. Jason Fry is the author of more than 40 Star Wars books and short stories, including The Weapon of a Jedi and the novelization of The Last Jedi. Yoon Ha Lee's debut novel Ninefox Gambit was a finalist for the Hugo, Nebula, and Clarke awards. Dragon Pearl was a New York Times bestseller. Rebecca Roanhorse has won the Hugo, Nebula, and Locus awards and is the New York Times bestselling author of Star Wars: Resistance Reborn, Trail of Lightning, Storm of Locusts, and Race to the Sun (Rick Riordan Presents). Anne Ursu is the author of several fantasies for young readers, including Breadcrumbs, The Lost Girl, and National Book Award Nominee The Real Boy. Greg van Eekhout writes science fiction and fantasy, including Norse Code, Voyage of the Dogs, and COG.