Trouble maker for justice : the story of Bayard Rustin, the man behind the march on Washington / Jacqueline Houtman, Walter Naegl, Michael G. Long. 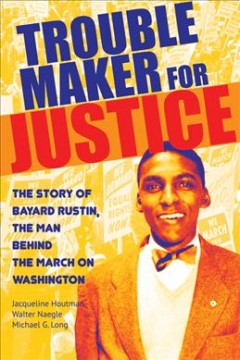 Michael G. Long is an associate professor of religious studies and peace and conflict studies at Elizabethtown College and is the author or editor of several books on civil rights, religion, and politics in mid-century America, including I Must Resist: Bayard Rustin's Life in Letters (City Lights, 2012), We the Resistance: Documenting a History of Nonviolent Protest in the United States (City Lights, 2018), First Class Citizenship: The Civil Rights Letters of Jackie Robinson (2007), Marshalling Justice: The Early Civil Rights Letters of Thurgood Marshall (2011). He holds a Ph.D. from Emory University in Atlanta and resides in Highland Park, Pennsylvania. Long's books have been featured or reviewed in the New York Times, the Los Angeles Times, the Boston Globe, USA Today, Book Forum, Ebony/Jet, and many other newspapers and journals. He has appeared on C-Span and NPR, and his speaking engagements have taken him from the National Archives in Washington, D.C., to the Houston Public Library, to the City Club of San Diego and the Metropolitan Club in New York City.

Jacqueline Houtman is the author of the award-winning children's book "The Reinvention of Edison Thomas," and earned a PhD in Medical Microbiology and Immunology from the University of Wisconsin-Madison. Her science writing for adults and children has appeared in World Book Science Year, FASEB&;s Breakthroughs in Bioscience series, Cleveland Clinic Magazine, The Dana Foundation&;s Progress in Brain Research, The Dana Sourcebook of Immunology and numerous academic and educational publications. Her debut novel, The Reinvention of Edison Thomas, was published by Boyds Mills Press in 2012.

Walter Naegle is the former partner of the American Civil Rights leader Bayard Rustin and is executive director of the Bayard Rustin Fund, which commemorates Rustin's life, values, and legacy.