The bond : our kinship with animals, our call to defend them 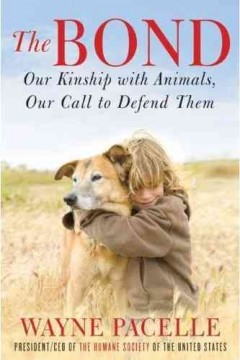 During his seventeen years with the Humane Society of the United States, including seven years as president and CEO, Wayne Pacelle has played a leading role in making HSUS, the nation's largest animal protection charity, into a dynamic public force and voice for animals. Taking a special interest in law reform, he has been the leading strategist in getting animal-protection laws enacted by direct action of the electorate, designing winning campaigns in a dozen states for ballot initiatives that outlawed cockfighting, factory farming practices, bear baiting, and a host of other inhumane practices. He has become the voice and face of the humane movement in this country. Pacelle was named one of NonProfit Times's "Executives of the Year" for his leadership in responding to the Hurricane Katrina crisis. A graduate of Yale University, Pacelle lives in Washington, D.C.

Founded in 1954, The Humane Society of the United States is dedicated to confronting cruelty through public education, enforcement of humane laws, support of local humane organizations, investigations and litigation, and reform of public and corporate policies. The HSUS and its affiliates also provide veterinary services to remote areas, come to the aid of animals in natural disasters and incidents of large-scale cruelty, and operate a network of sanctuaries and rescue centers that directly care for thousands of animals each year. The HSUS family of organizations is supported by over 11 million people nationwide. Learn more at www.humanesociety.org, and join the humane movement!