Brothers Emanuel : a memoir of an American family 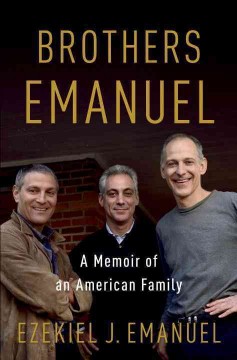 Ezekiel âZekeâ Emanuel is the son of Benjamin Emanuel and Marsha Emanuel and the brother of Chicago mayor and former White House chief of staff Rahm Emanuel and Hollywood talent agent Ari Emanuel. A vice provost and university professor at the University of Pennsylvania and a member of the Institute of Medicine of the National Academy of Sciences, Emanuel also served as the special advisor for health policy to President Obamaâs director of the Office of Management and Budget. He is an op-ed columnist for The New York Times. Raised in Chicago, he now lives in Washington, D.C, and Philadelphia.