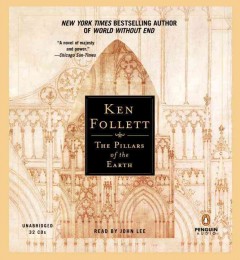 Ken Follett is one of the world's bestâloved novelists. He has sold more than one hundred million copies. His last book, World Without End, went straight to the No. 1 position on bestseller lists in the United States, Spain, Italy, Germany, and France.

The Hammer of Eden, another nailâbiting contemporary suspense story, came in 1998. Code to Zero (2000), about brainwashing and rocket science in the fifties, went to No. 1 on bestseller lists in the United States, Germany, and Italy, and film rights were snapped up by Doug Wick, producer of Gladiator, in a seven-figure deal. Jackdaws (2001), a World War II spy story in the tradition of Eye of the Needle, won the Corine Prize for 2003. Film rights were sold to Dino De Laurentiis. Hornet Flight, about two young people who escape from Germanâoccupied Denmark in a Hornet Moth biplane, is loosely based on a true story. It was published in December 2002. Whiteout, a contemporary thriller about the theft of a dangerous virus from a laboratory, was published in 2004 and made into a miniseries in 2009.

World Without End, the longâawaited sequel to The Pillars of the Earth, was published in October 2007. It is set in Kingsbridge, the fictional location of the cathedral in Pillars, and features the descendants of the original characters at the time of the Black Death. It was a No.1 bestseller in Italy, the United States, the United Kingdom, Germany, France, and Spain, where it was the fastestâselling book ever published in the Spanish language, outstripping the last Harry Potter book.

In 2008 Ken was awarded the Olaguibel Prize by the Colegio Oficial de Arquitectos VascoâNavarro for contributing to the promotion and awareness of architecture. A statue of him by the distinguished Spanish sculptor Casto Solano was unveiled in January 2008 outside the Cathedral of Santa Maria in the Basque capital of VitoriaâGasteiz in northern Spain.

He was chair of the National Year of Reading 1998 â 99, a British government initiative to raise literacy levels. He was president of the charity Dyslexia Action for ten years. He is a member of The Welsh Academy, a board director of the National Academy of Writing, and a fellow of the Royal Society of Arts. In 2007 he was awarded an honorary Doctorate in Literature (D.Litt.) by the University of Glamorgan as well as similar degrees by Saginaw Valley State University, Michiganâwhere his papers are kept in the Ken Follett Archiveâand by the University of Exeter in 2008. He is active in numerous Stevenage charities and was a governor of Roebuck Primary School for ten years, serving as chair of governors for four of those years.