What moms can't do 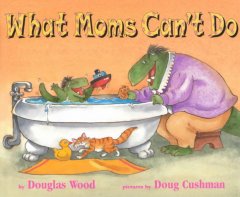 Douglas WoodÂ is the author of A Quiet Place as well as theÂ New York TimesÂ bestselling Canât Do series. His booksÂ Old TurtleÂ andÂ Old Turtle and the Broken TruthÂ were both international bestsellers. He lives in a cabin in the woods of Minnesota. A studied naturalist, Douglas shares his knowledge of nature as a wilderness guide. Visit him at DouglasWood.com.

Doug CushmanÂ has illustrated over 130 childrenâs books, thirty or so of which he also wrote. His titles have beenÂ New York TimesÂ bestsellers and won awards including the Christopher Award, the California Young Readers Medal, and two Maryland Blue Crab Awards. Doug was also the recipient of a National Cartoonists Society Newspaper and Magazine Illustration Award, and he has displayed original art in France, Romania, and the United States. Doug enjoys mystery novels, playing slide guitar horribly, cooking, and traveling. He lives in St. Malo on the Brittany coast in France.