"Frankly, we did win this election" : the inside story of how Trump lost 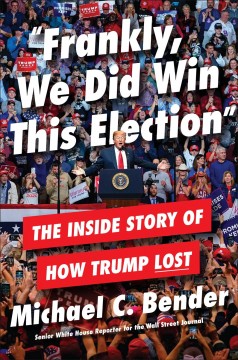 <p><b>MICHAEL C. BENDER<i></i></b>is the senior White House reporter for the <i>Wall Street Journal </i>whose coverage of President Trump has been recognized for its deep sourcing, balance, and valuable behind-the-scenes portraits of Trump&#8217;s administration and presidential campaigns. Bender was awarded the Gerald R. Ford Foundation Journalism Prize for Distinguished Reporting on the Presidency in 2019 for work that &#8220;set a consistently high standard of reporting&#8221; and &#8220;provided a valuable chronicle of the president, his team, and the movement that has reshaped American politics and national policy.&#8221; In 2020, he received the National Press Club award for political analysis for a series of stories that detailed the sights, sounds, and inner workings of Trump campaign rallies. Since 2000, Bender has covered local, state, and national politics for the <i>Daily Sentinel </i>in Grand Junction, Colorado, <i>Dayton Daily News</i>, <i>Palm Beach Post</i>, <i>Tampa Bay Times</i>, and <i>Bloomberg News</i>. He joined the <i>Journal </i>in 2016 and published more than eleven hundred stories about Trump in the next five years. He has also served as an on-air political analyst for CNN. Born and raised in Cleveland with his six younger sisters, Bender graduated from the Ohio State University in 2000 with a degree in history and now lives in Washington with his wife, <i>Washington Post </i>White House bureau chief Ashley Parker, and their two daughters.&#160;</p>