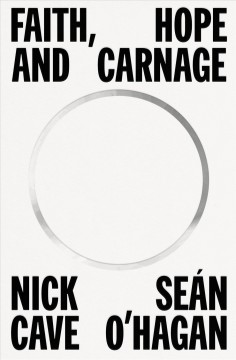 Nick Cave has been performing music for more than forty years and is best known as the songwriter and lead singer of Nick Cave & The Bad Seeds, whose latest album Ghosteen was widely received as their best work ever. Caveâs body of work also covers a wider range of media and modes of expression including film score composition, ceramic sculpture and writing novels. Over the last few years his Red Hand Files website and 'Conversation withâ live events have seen Cave exploring deeper and more direct relationships with his fans.

Sean OâHagan has interviewed many major artists, writers and musicians over the last four decades. He currently works as a feature writer for the Observer and is photography critic for the Guardian.