Harry Potter and the deathly hallows #7 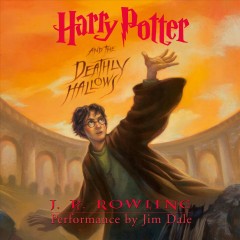 J. K. Rowling is the author of six celebrated novels in the Harry Potter sequence. Her most recent book, Harry Potter and the Order of the Phoenix, was named an ALA Notable Book and recognized with prizes as diverse as an Anthony Award for Best Young Adult Mystery and a Best Science Fiction/Fantasy Novel Award from Disney Adventures magazine. She has also been named an Officer of the Order of the British Empire. Ms. Rowling lives in Scotland with her family.

Jim Dale is the voice of all the characters in the Harry Potter audiobook series. This work has won him a Grammy® Award (2000), three Grammy nominations and three Audie Awards. A Member of the Order of the British Empire, Mr. Dale has also won a Tony Award®, four Drama Desk Awards and an Academy Award® nomination. Visit Jim at www.jim-dale.com.