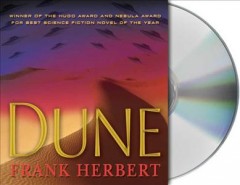 Scott Brick first began narrating audiobooks in 2000, and after recording almost 400 titles in five years, AudioFile magazine named Brick a Golden Voice and "one of the fastest-rising stars in the audiobook galaxy." He has read a number of titles in Frank Herbert's bestselling Dune series, and he won the 2003 Science Fiction Audie Award for Dune: The Butlerian Jihad. Brick has narrated for many popular authors, including Michael Pollan, Joseph Finder, Tom Clancy, and Ayn Rand. He has also won over 40 AudioFile Earphones Awards and the AudioFile award for Best Voice in Mystery and Suspense 2011. In 2007, Brick was named Publishers Weekly's Narrator of the Year.

Orlagh Cassidy is the winner of the 2009 Best Voice in Children & Family Listening and the 2008 and 2011 Best Voice in Mystery & Suspense. She's narrated for Jacqueline Winspear, James Patterson, Erica Spindler, Beth Harbison, and Frank Herbert, among others.

Simon Vance is the critically acclaimed narrator of approximately 400 audiobooks, winner of forty-one AudioFile Earphones Awards, and a six-time Audie recipient. He was the winner of the 2012 Audie Award for Best Male Narrator, and was named the 2011 Best Voice in Biography and History and the 2010 Best Voice in fiction by AudioFile magazine. Simon was named a "Golden Voice" by Audiofile Magazine, and Booklist Magazine named him their "Voice of Choice".

Ilyana Kadushin is best known for her narration of the Twilight audiobook series, and has worked on other audiobooks, including The Memory Keeper's Daughter, Post Grad and Dune, which won an Audie Award. Her other voice work includes national commercials, animation, and popular video games such as Lord of the Rings.