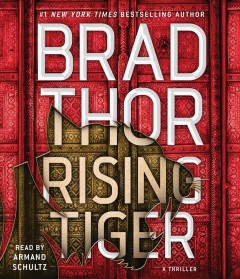 Brad Thor is the #1Â New York TimesÂ bestselling author of twenty-two thrillers, includingÂ Black Ice,Â Near DarkÂ (one ofÂ Suspense Magazineâs Best Books of the Year),Â BacklashÂ (nominated for the Barry Award for Best Thriller of the Year),Â SpymasterÂ (âOne of the all-time best thriller novelsâ âThe Washington Times),Â The Last PatriotÂ (nominated Best Thriller of the Year by the International Thriller Writers association), andÂ BlowbackÂ (one of the âTop 100 Killer Thrillers of All Timeâ âNPR). Visit his website at BradThor.com and follow him on Facebook at Facebook.com/BradThorOfficial and on Twitter @BradThor.

Armand Schultz appeared on Broadway in The Herbal Bed, A View From The Bridge, and The Secret Rapture. He has performed extensively with The New York Shakespeare Festival and has been seen off-Broadway in the award winning Stuff Happens at The Public Theatre. His films include Vanilla Sky and Malcolm X.