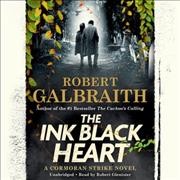 Robert Galbraith is a pseudonym for J.K. Rowling, bestselling author of the Harry Potter series and The Casual Vacancy.Â Rowlingâs original intention for writing under Galbraith was for the books to be judged on their own merit, and to establish Galbraith as a well-regarded name in crime in its own right. The Strike Novels haveÂ topped the national and international bestseller lists and the series has been adapted for television, produced by BrontÃ« Film and Television.